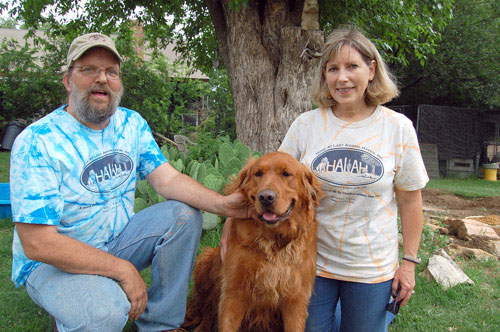 ARTICLE FROM THE BURLESON-CROWLEY CONNECTION

Turning off of County Road 907 near Godley onto the property of the Home At Last Animal Haven, there are trees, grass, a tank pond — and a large welcoming committee.

Not unusual when visiting a Johnson County home, but this welcoming committee is special and a little furry.

This committee is made up of dogs — a lot of friendly dogs — who were once homeless and friendless.

Don’t drive a new car out here. Don’t dress to impress and get ready to get dirty. These dogs are certainly not afraid of people and they are ready to play.

Red and Cowboy are always ready to greet visitors.

“Some of the dogs, we don’t know where they came from,” said director Debye Humphrey. “Some of them are dumped here. Some are owner-released. Some of them came pregnant.”

Norm and Joy Yadon unintentionally founded HALAH when they moved from their home in Dallas in 1976, when they came across so many abandoned or friendless animals wandering beside the roads of Johnson County.

As long-time animal lovers, they could not leave the thirsty and starving animals they saw.

They began bringing home one or two animals at a time, eventually becoming completely devoted to these homeless, friendless animals.

After 14 years, which included placing 8,778 feet of perimeter fencing to separate their dogs from the increasing traffic on the county road, the Yadon’s decided to take the first step toward receiving donations.

The haven is not funded by any government agencies and 100 percent of funding is from private donations.

Norm died in September 2006 at age 83, and Joy died a little over 13 months later. HALAH is now run by their family, headed up by their daughter, Humphrey, and son, Court Yadon, who has been a fixture at “The Haven” for more than 30 years.

“It used to be a dead-end road right down there where that little bridge is,” Yadon said, pointing towards the tank pond. “So, that naturally made it a dump ground for everybody [to leave animals]. They thought ‘They’ve got water.’ They didn’t think about the food part.”

HALAH is an animal rescue which provides a second chance for friendless animals and is a rustic facility where dogs are allowed to romp and rest together in huge yards.

The attributes normally associated with many animal shelters are not present here.

As a no-kill shelter, there are no tiny, sterile cages where the animals live hoping to be adopted before their time runs out.

There are no roofs or tile floors to protect visitors from getting dirty. The fences creating the dog yards were constructed in various dimensions for grouping similar breeds or sizes as well as providing shade.

The dogs and puppies take advantage of the open space of their yards and like watching all the activities going on around them.

And every time a train passes near, a howling contest commences.

Humphrey and Yadon said dogs that are adopted into families seem to make an easy transition into house training, recognizing the outdoors as a familiar place to conduct their business.

But with the downturn of the economy, there is a problem. More dogs are coming in, released by owners who can no longer take care of them, than are adopted and going out to new homes.

“It’s heartbreaking for us, especially now with the economy. There are so many dogs,” Humphrey said. “We’ve had some people who have lost their homes and their dog along with it.”

Humphrey said that they try to help as many people as possible, but there is only so much money and so much room, even in the country.

“We’ve had several owner surrenders and we’ve had some heartbreaking stories. We had a bloodhound that was an owner-surrender that Court was absolutely in love with,” she said. “I thought that Court and the trainer at PetSmart [in Burleson, where some of the dogs are taken for monthly adoption days] were ready to fight over it. She couldn’t take it and he couldn’t take it really. It ended up being adopted to one of the workers at PetSmart that had a young kid and that kid absolutely adored that dog.

“Then two months later, they lost their house and had to get rid of the dog. We knew the guy and we knew the dog and we had been getting updates every time we were in the PetSmart. Court kind of wanted the dog back again. Everyone still wanted the dog.”

There was a happy ending for the bloodhound as another home was found, but Humphrey and Yadon have seen a noticeable increase of owner-surrenders in recent years.

“We’ve had to turn down people a lot, mostly in the last three years more than anything,” Yadon said. “There’s been a big increase in people [surrendering animals]. They’re not able to take care of their dogs. I don’t get into details on the phone, but times are bad. People are leaving their homes.”

And Humphrey recognizes that in most cases it’s for financial reasons. Most people don’t want to give up their dogs because they are considered members of the family.

“We had one guy out here that was in tears. He had two dogs in the back of his car,” Humphrey said. “Court went out and told him we were full. The guy looked down and then looked up at Court and there were just tears coming down. He said, ‘I can’t feed them.’ We didn’t have a place that we could put them.”

Dogs waiting for their ‘forever homes’

Dogs are available for adoption each weekend, or by appointment, on the HALAH grounds at 5640 CR 907, outside of Godley, waiting for their “forever homes.”

“They can go to our website,” Yadon said. “Once they see a dog they like, they can always meet us somewhere or they can go to PetSmart and see it then.”

Dogs from Halah are also available for adoption from 11 a.m. to 4 p.m. on the third Sunday of each month at PetSmart, located at 12930 S. Freeway in Burleson.

“They’ve got a good deal going too. They don’t have to house [the dogs],” Yadon said. “Whenever you buy a puppy, you also need food, food bowls, a dog house and this and that for them. It’s a win-win for everybody. If they had to take care of the dogs themselves, it would be a big hassle. They would have to have people come in the middle of the night to take care of them.”

Humphrey said that they have dogs of all ages, sizes, colors and mixes from which to choose.

And everyone should adopt a dog because it’s just healthy to do so.

“People should adopt a dog because they’ve actually done studies that it’s better for your blood pressure. You live longer if you have a dog,” she said. “They say older people will get out and exercise more if they have a dog. Dogs are just good in general. [Adopting a dog] gives these guys a second chance at life.”

For more information on adoptions or to donate, call 817-389-3813, visit www.halah.org or e-mail information@halah.org.

Donations are also accepted by mail by sending them to: