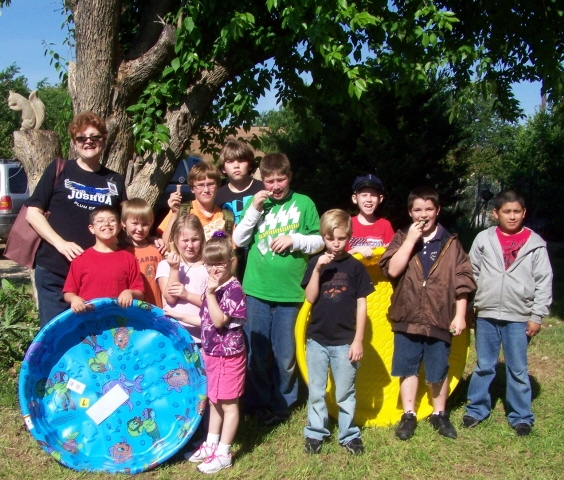 ARTICLE FROM THE JOSHUA STAR

One Plum Creek Elementary teacher recently learned an object lesson for the old saw: “The pen is mightier than the sword.” Or maybe that should be “The laser printer is mightier…”.

A one-page reading comprehension exercise taken from the Internet sparked an interest in several of teacher Carla Whitworth’s reading classes and spurred her students into action, Whitworth said.

The exercise was about homeless animals and euthanasia.

“That sparked their interest and touched their hearts,” Whitworth said of her students. “’They just never realized there were so many animals out there that were being uncared for and were being put to sleep.”

So the students, ranging from the first grade through the sixth, decided they wanted to raise money to help out a Johnson County refuge for dogs. They collected money among themselves and put donation jars in each of the school’s other classrooms. One teacher was so inspired that she told her class she would match any donation they could make with money out of her own purse.

As a result, Whitworth’s students raised $310. They used the money to buy plastic swimming pools so that the 60-70 dogs at Home At Last Animal Haven could cool off this summer. They also used part of the money for dog treats. Some of it went to medical expenses for one dog and more will be spent later for plywood tables so the pooches can have shade over the coming months.

About 10 days before the end of the spring semester, several of Whitworth’s students took a field trip to HALAH, in Godley, to deliver the pools and the treats.

“The kids just fell in love with the place and they can’t wait to go back,” Whitworth said. As a result, fund-raising for the refuge will become a permanent project for Whitworth’s classes, the teacher said. Many of the students. taking the field trip also want to go back, which they probably will during both the fall and the spring semesters next year.

The students also will collect money to pay for a booth for HALAH during the school’s Trade Day, which is set for Oct. 17, Whitworth said. Refuge operators Court Yadon and Debye Humphrey will use the opportunity to try to adopt out several of the dogs, the teacher said.

A handful of the kids didn’t want the field trip to end. They said they wanted their parents to bring them back in the evening so they could camp on the refuge grounds, Whitworth said.

HALAH is a 501(C)3 organization which is dedicated to the “no-kill” philosophy, Humphrey said.

The refuge was started “by accident” by her parents, Norm and Joy Yadon, when they moved to Godley in 1976 when they continued to feed several stray dogs house builders had fed while building the house.

The Yadons continued to see homeless dogs as they traveled the roads of Johnson County, so they picked them up and took them home.

In 1991, the Yadons applied for non-profit status. After the couple died within 13 months of each other several years ago, their son, Court, took over the operation, which runs entirely on donations.

Although Court has hosted field trips at the refuge in the past, the Plum Creek trip was the first hosted by his sister, Humphrey.

“It was controlled chaos,” Humphrey said. “The kids were really having a lot of fun.”

The Plum Creek students practically fought over who would hold the hoses that filled up the swimming pools, Humphrey said.

“I think they just wanted to see how the dogs were going to react and wanted to get in the pens with them,” she added. The students petted puppies and threw balls for the older dogs. They also appreciated it when Court released a couple of nonpoisonous snakes from his collection into a water tank on the property.

“It was a wonderful experience,” Whitworth said. “I’m so glad that my children, wanted to become involved and to make a difference in their community.

“They realized you can find a real passion from reading. That’s a dream come true for me.”